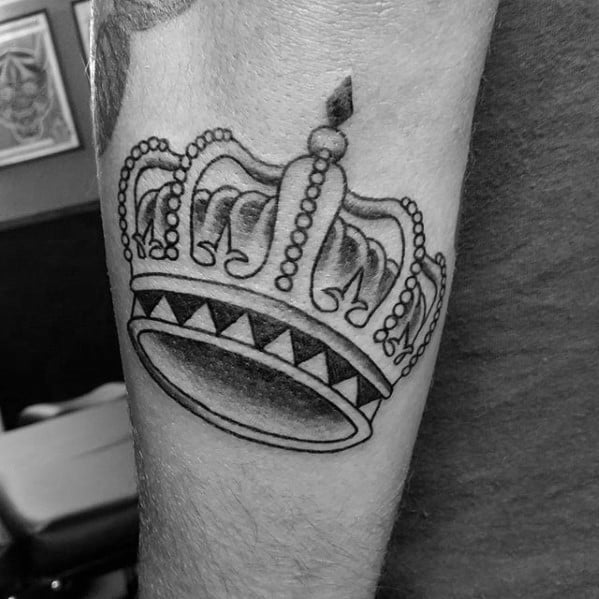 When deciding on a tattoo it is worth choosing a cool design that is also rich in symbolism, that way, you will not regret it. A crown tattoo is a great option for strong men due to the meaning attached to it. The headdress is associated with royalty and represents strength, triumph, moderation, and glory. Those who like the idea of ​​courage and royalty will be drawn to lion and crown tattoos; Alternatively, adding a name to your piece can make it more personal. You can choose a bold and bright color, or go for something plain and simple. When it comes to placement, the crown works well on both large and small designs. Another popular option is for the couple to get matching ink. If you’re feeling like royalty, consider these options for your next body art.

The lion with crown

The lion is often referred to as the king of the jungle, so it is not surprising that the animal is depicted wearing a crown. The best thing about combining these two images is their powerful symbolism. The majestic beast is often associated with strength, courage, and royalty, while the crown represents victory, control, and strength. A man who values ​​these qualities will find the design attractive, as he can reflect his beliefs.

Crowns are worn by the monarchy and associated with glory and power. These qualities are attractive to many men because they can remind them of their inner strength and their desire to succeed. There are many options for obtaining crown ink and you can be as creative as you like. Some men choose to honor their relationship with this tattoo option, often by including phrases like “their king”, so the world knows they have taken it.

A queen crown tattoo may seem like a more feminine option, but a tough guy can rock this design too. It represents victory, nobility and, of course, royalty. The wearer could purchase this piece to honor the women in her life, or perhaps to reflect that she is in contact with the softer side of her. It also makes great body art when paired with a king’s crown.

The crown of thorns is a religious symbol. It comes from the biblical story of Jesus Christ, who was forced to wear this dying veil before his crucifixion. The thorn is a symbol of Jesus’ sacrifice for the good of the human race and creates amazing body art. Spiritual people will be deeply affected by the symbolism associated with this design and can choose to depict it with the head of Jesus or leave it as a separate piece.

Who says bigger is necessarily better? Small tattoos are becoming more and more popular with both men and women, making them a great option for your next piece. There is something less appreciated but great about small tattoos, and they are also incredibly versatile; You can get a tattoo anywhere on your body. This means that you can choose a neck or finger design if you wish. Another proponent of small tattoos is that they tend to be cheaper and take less time to complete, which generally means they don’t hurt much.

Do you want your next tattoo to be deeply personal? So why not choose a crown name? When deciding on body art, it pays to choose something that is eye-catching and meaningful. After all, your ink is supposed to be permanent and you want to make sure you don’t regret your decision. Having a custom design for you personally makes it more symbolic, which is why people often decide to include the names of their loved ones. The crown design works well with the name, be it your romantic partner, a loved one, or someone who has passed away.

The beauty of the tattoo can also be in its simplicity. We understand the appeal of complete and custom designs, but not every piece has to be this way. Some men prefer a less appreciated style of body art, opting for a basic but useful toner. If you choose a simple tattoo, the emphasis will be on the shapes and lines. These pieces usually have minimal shading and work best with classic black ink.

Rolex crown tattoo is one of the most famous wristwatch manufacturers in the world, and for good reason. It is a company famous for its excellent quality, luxurious pieces and the same ideas are translated into a tattoo style. A company’s crown logo is a popular choice for inking because it is associated with prestige and success. If you want to remember the goals you want to achieve in life or strive for the great physical dexterity, this is the perfect choice for your next body art. With that in mind, it is recommended to carry this design somewhere where you can see it every day.

The skull and crown may not be a combination that you would normally think of putting together, but it makes a great tattoo. It is often preferred by gamers and is believed to represent good luck. People can choose to include other items, such as chips and poker cards. However, the meaning is open to interpretation as the crown generally represents strength and leadership, and the human skull is associated with strength, protection, and death.

Crown heart tattoo is much more than eye-catching. It also has strong symbolism attached to it. The headdress worn by royalty is associated with strength, triumph, and nobility, but takes on new meaning when placed on the heart. It also dates back to the Irish Claddagh ring. The symbol is distinguished by the hands, the heart and the crown, the direction of the headdress is important; To face the doll means to be lifted. The opposite is true if you are single.

Some tattoos are popular options for inking because they look great, but you should always do your research. The five-point crown design is associated with the prison and is associated with the Latin Kings gang. Unless you have links to this organization, it is probably best to avoid getting a tattoo from this piece. The ink is believed to represent the lifestyle of a gangster and the idea of ​​my “crazy life”.

If you want a bold, bright and meaningful tattoo, the rose and crown will appeal to you. Of all the inking flowers, this flower is perhaps the most popular and for good reason. It attracts attention and is a symbol of the balance between pleasure and pain. There are many different shades to choose from, but the most popular is red, which represents passion and desire. On the other hand, the crown is associated with victory, power and moderation. This tattoo must be inked with color to maximize the effect!

A deeply religious individual can honor his faith by drawing a cross design on his skin. The symbol is especially important for Christian beliefs and is associated with the crucifixion of Jesus Christ. More than that, it is believed to be his willingness to sacrifice himself to help humanity atone for our sins. When combined with a cross, it is often seen as a religious symbol representing the reward of believers in heaven.

No one says you have to be a sailor to find amazing anchor tattoos, one of the most popular symbols for men to get inked with. The purpose of a heavy metal device is to hold the vessels in place so that they are not deflected with the current and are therefore often associated with stabilization and grounding. Men who want to stay focused during difficult times in their lives may find this design appealing as it reminds them that better times await. In combination with the crown, it can be an indication of a person’s love for the sea.

The feather is rich in symbolism and has various meanings. Many of us wish we could fly and travel to places that are often out of reach, which is why the feather is such a powerful symbol. It has different interpretations but it is generally associated with freedom and beauty. On the other hand, the crown is associated with power and glory, which makes the combination of these two elements interesting. Your chosen tattoo will look amazing with colored ink, making it a bold and impressive option that is not to be missed.